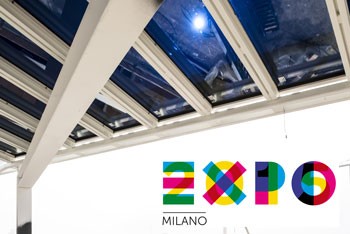 March 4, 2015 – Milan, Italy – Research Frontiers’ patented SPD-SmartGlass technology has been selected as the exclusive smart glass for the USA Pavilion at this year’s World’s Fair, Expo Milano 2015, which is expected to attract 20-30 million people from May through October. Friends of the USA Pavilion Milano 2015, the private sector partner working with the U.S. Department of State to organize the U.S. presence at Expo Milano in Italy, today announced its partnership with Research Frontiers Inc. (Nasdaq: REFR) at the site of the USA Pavilion in Milan. Among those in attendance at the announcement ceremony were Charlie Faas, CEO of Friends of the USA Pavilion Milano 2015, Joseph M. Harary, CEO of Research Frontiers Inc., the company that invented and licenses SPD-SmartGlass technology for use in the automotive, aircraft, marine, museum and architectural industries, and Alberto Bertolini, CEO of Isoclima, which made the SPD-SmartGlass CromaLite panels for the USA Pavilion roof.
The USA Pavilion will have 312 large panels of SPD-SmartGlass manufactured under license from Research Frontiers by Isoclima, a leading high-end world glass manufacturer based in Este, Italy. Each panel measures approximately 1 meter by 3 meters, making the total surface area in the roof more than 10,000 square feet.
“This is the largest known installation of smart glass in the world for a roof application,” said Joseph M. Harary, president and CEO of Research Frontiers. “The USA Pavilion’s magnificent views from the rooftop terrace, and the unparalleled ability to protect occupants from the heat of the Milan summer, provide a perfect setting for this impressive and elegant architectural use of our SPD-SmartGlass.”
According to the current designs for the USA Pavilion by leading international architect James Biber, each panel will switch in seconds from dark to clear, or any desired tint in between, in response to an automated control system. USA Pavilion visitors will be able to instantly control individual panels in the roof from a touchscreen tablet.
“We love SPD-SmartGlass’ ability to instantly switch from clear to opaque in response to environmental conditions. We’re using more than 10,000 square feet on the rooftop terrace to warm or cool visitors with a minimum amount of energy (the equivalent of only six 100 watt light bulbs to fully clear the roof panels and no power to keep them tinted). We’re also using SPD-SmartGlass to create the world’s largest installation of its kind: treating the glass panels as an array of very large pixels and programming images, patterns, words and reactive motion onto what would otherwise have been a simple glass canopy,” said Biber, whose Manhattan-based architectural firm won the design competition for the USA Pavilion.
SPD-Smart electronically dimmable windows and skylights block heat in the summer and reduce heating and cooling energy requirements in the winter, while maintaining a pre-selected level of light and temperature and blocking harmful UV rays. By more effectively controlling daylighting, SPD-Smart windows also allow “daylight harvesting,” which some independent sources estimate can save 35%-60% on lighting energy. With the growing pressure to reduce the energy use of buildings, many expect it to be a cornerstone of intelligent building design for years to come. Because SPD-SmartGlass can be retrofitted to existing structures, even existing building stock can benefit from this green technology. This is significant as approximately 61% of all construction projects are retrofit projects, according to the U.S. Green Building Council.
SPD-Smart technology is the only smart glass technology that gives users the ability to instantly and precisely control the level of shading to any point between very dark and clear. This provides exceptional control over solar energy while also adding to user comfort, security and protecting interiors. Available in glass or plastic, SPD-Smart windows can be controlled manually or automatically, and are currently being used in the automotive, architectural, aircraft and marine industries, and to protect priceless artifacts in museums from damage from visible light.
Charlie Faas, CEO of the Friends organization, today thanked Research Frontiers in addition to Isoclima and Hitachi Chemical, which supplied the special SPD-Smart light-control film that is laminated inside the SPD-Smart CromaLite panels used in the USA Pavilion roof. “We looked at various switchable glass technologies and wanted the best, and thanks to the involvement of Research Frontiers, Isoclima, and Hitachi Chemical, we were able to get the best performing product possible from the combined efforts of companies on three continents. In just two months, USA Pavilion visitors will experience the SPD-SmartGlass CromaLite roof panels and see just how smart their glass, and their buildings, can be.”

Joseph M. Harary, President and CEO of Research Frontiers, Charlie Faas, CEO of the Friends of the USA Pavilion at Expo Milano 2015, and Alberto Bertolini, CEO of Isoclima announce partnership for the exclusive supply of SPD-SmartGlass CromaLite panels to the USA Pavilion at the 2015 World’s Fair in Milan

About Friends of the USA Pavilion Milano 2015
Friends of the USA Pavilion Milano 2015, a 501(c)(3) nonprofit organization, is a collaboration between the James Beard Foundation (JBF) and the International Culinary Center (ICC), in association with the American Chamber of Commerce in Italy, whose mission is to conceive, design, fundraise for, and produce the USA Pavilion and programs at Expo Milano 2015 under the auspices of the U.S. Department of State. Current partners include GE, NUSSLI, Uvet, Brand USA, Microsoft, DuPont, Boeing, Illy, 3M, FleishmanHillard and Research Frontiers.
Through the leadership of Commissioner General Doug Hickey and the overall direction of the U.S. Department of State, the Friends organization will oversee every aspect of the project in consultation with a team of experts across the science, business, technology, agriculture, sustainability, design and other fields. The pavilion's management and program is directed by President Dorothy Hamilton (founder and CEO of ICC), CEO Charlie Faas, and Chief Creative Officer Mitchell Davis (EVP of JBF). Biber Architects has been selected to design the USA Pavilion, and Thinc Design is serving as USA Pavilion exhibition designer.
For more information, visit: www.usapavilion2015.net and www.expo2015.org.